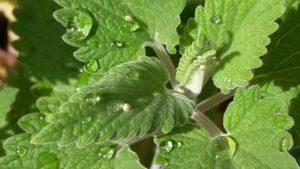 Can ferrets have catnip and experience the same effects? If you are a kitty fan, you may be aware of the effect that catnip has on this animal.

Some pet owners claim that it seems like cats are getting “high” with catnip. Many of them roll around and become more hyperactive than usual. Ferrets and cats can share meals in some cases, but is catnip the best cat food for ferrets?

Before we continue, here are a couple of basic facts about catnip. It is a plant that originates from Europe, Central Asia, and the Middle East. It didn’t take long for people to take it to other parts of the world. Suitable climates for the herb include North America, New Zealand, and Europe.

The scientific name of the plant is Nepeta cataria, but you most likely know it as catnip or catswort. Yes, these names are primarily because of the obsession cats have with this plant.

Approximately three of four kitties will react positively to catnip. That includes getting hyperactive, jumping around, rolling over, etc.  It is the reason why you might think your cat got “high” from catnip.

The scientists believe in a hereditary reaction. That means a kitten might be indifferent to catnip if their mom reacted the same way.

The most common way of giving cats catnip is by adding it to their favorite toys.

Can Ferrets Have Catnip?

Yes, ferrets can eat catnip. There is no reason why you shouldn’t give this plant to your ferret to consume. However, the chances are your pet might not like it. According to owner reports, most ferrets remain indifferent to catnip. It will be like you have given them any other food.

However, it is crucial to mention the reaction to catnip is highly individual. Although they are in the minority, some pet owners reported that their ferrets love catnip. They even noticed similar effects to those in cats. That means their ferrets were jumping around and looked like they were “high.”

How Long Do the Effects Last in Ferrets?

Now that we cleared the “catnip dilemma,” it is interesting to mention how it affects them? Although not as many will react positively, those who do will enjoy the effects longer than cats.

According to the experience of pet owners, cats only enjoy catnip for a half an hour or so. Unlike that, ferrets may keep being hyperactive for a few hours. You should, however, monitor your pet because some may have seizures because of catnip.

Can Ferrets Have Catnip with Cat Toys?

It may not be the best option to give your ferret catnip in combination with cat toys. They may enjoy the toys, but some items may harm your pet.

The reason is that they can swallow small components, and that can lead to a breathing blockage. Ferrets easily tear toys apart, so avoid any that contain foam and rubber, too. These materials can be harmful to your pet’s health.

You still have a wide range of toys that you can use, including simple squeaky toys and softballs, as well as specialized ferret toys. Believe it or not, even old pants can be great fun for a ferret. Alternatively, you can go creative and create some toys from things lying around in your home. You can easily turn old PVC pipes into a maze with tunnels.

Even if you add catnip to those toys, the chances are your ferret won’t notice a difference. We mentioned that most ferrets are immune to the effects catnip has on cats. If your ferret is not reacting to catnip by getting excited or hyperactive, there is no point in using it.

You can choose other healthier food with more nutrients than catnip. Since protein is important, pork, beef, and chicken treats can be a great choice. Always consider the optimal nutritional value your ferret should receive daily, and come up with a diet plan that meets it.

Is It Moral to Give Your Pets Catnip?

It is the dilemma many owners have. If you compare things, you can say that catnip for pets is like cannabis for people. It can provide many benefits, but some people still consider it a drug.

The key thing to consider is how your pet reacts to catnip. If they don’t seem to experience any side effects, but only benefits, there is no reason why they shouldn’t consume it. Instead of asking “can they have catnip,” think how it affects them, and decide whether they should consume it accordingly.