Skip to content
Courtney Ferrets as pets October 30, 2019fun facts about ferrets, what are ferrets 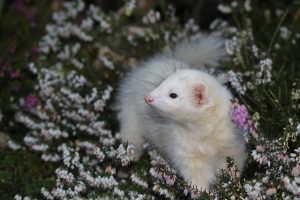 Thinking about picking up a new pet? While the sausage-shaped, carnivorous ferret might not be the first animal that comes to mind when considering a cuddly pal, millions of people around the world, past and present, have enjoyed the company of this little mammal. In fact, the ferret is the most popular and common house-pet in the U.S., after the dog and cat. Start your ferret journey here, with these fun facts about ferrets.

Ferrets can be divided into two basic groups: the common ferret, and the black-footed ferret. The common ferret, a type of European polecat, was domesticated over 2,000 years ago, and has lived alongside human beings since. A member of the Mustela genus, some of the ferrets closest relatives include the wolverine, ermine, mink, and weasel. The wild black-footed ferret, which is a member of the weasel family, is currently an endangered species. These wild ferrets differ from their domesticated cousins in that they are solitary, nocturnal animals, and are always tan-colored with black feet. By contrast, the common ferret comes in a variety of colors, can adjust to a variety of schedules, and is more playful and social than the wild, black-footed variety. We will focus on the common, or pet ferret for this article.

Ferrets typically measure about fifteen inches from nose to tail, and weigh between 1.4 and 5 pounds, making them a bit smaller in size and weight than an average housecat. The most common ferret fur colors are sable and black, though you will also find albino and champagne ferrets as well as the rare cinnamon-colored ferret. Domesticated ferrets are inquisitive and playful animals, and generally live between 6 to 10 years, and up to 15.

A brief history of ferrets 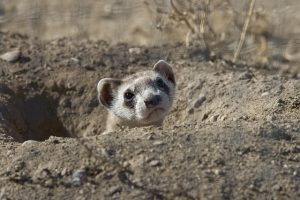 Ferrets were domesticated some 2,000 to 2,500 years ago, likely to hunt rabbits. “Ferreting,” the use of ferrets to flush rabbits, rats, or other undesirable pests from their burrows or holes has been a practice since at least ancient Rome. In fact, this is where we get the phrase, “to ferret out” something, such as prey lying in wait, or even a piece of information. Today, many English hunters still use ferrets to track and kill rabbits. The long, thin body of the ferret, and flexible ribs make them ideal for squeezing into narrow spots where prey may be waiting. Hunting ferrets can reach places that would be inaccessible to a larger hunting dog.

What do ferrets eat?

Ferrets are obligate carnivores, which means they require meat to survive, as their bodies lack the means to effectively digest and process plant matter. Other obligate, or “true” carnivores include all members of the felid, or cat family. Ferrets thus typically subsist on a meat and water diet similar to that of a housecat. In the wild, ferrets typically hunt small animals such as rabbits, prairie dogs, hedgehogs, mice, and birds, and will eat their prey whole, skin, fur, bones, and feathers alike. Pet ferrets can be fed meat, or specialty ferret food, similar to domestic cat food, though some owners prefer to feed them live, or “pre-killed” prey. Since ferrets have a high metabolism and like to be on the move, they typically eat 8 to 10 small meals per day.

As carnivorous animals, ferrets can be dangerous. There have been occasional cases of ferrets attacking children, or even biting off the fingers or ears of infants. Some doctors have publicly warned of the dangers of adopting ferrets as pets, both because of the potential for attack, and because, for a long time, ferrets could not be effectively vaccinated against rabies, though a vaccine was developed in 1992. Additionally, ferrets often have a naturally unpleasant smell, which may be a worry for many prospective owners. However, most ferret owners insist that ferrets make for wonderful pets, and incidences of violence against owners or small children are less common than canine attacks. In fact, a 1997 study carried out by the California Research Bureau found that dogs are roughly 200 times more likely than a ferret to bite humans. However, as with owning any pet, there is the potential that a ferret may attack its own or children in the household.

Ferrets and the Law

Ferrets are common house-pets in 48 of the 50 states. The exceptions are Hawaii and California, where it is illegal to own a ferret, unless you have a special permit. In addition, the District of Columbia and New York City have a ban on domestic ferrets. There are a variety of reasons for these bans, but they stem largely from a belief that ferrets are wild animals and may pose a danger to native animals or ecoystems should they escape. Other concerns stem from the fact that ferrets may pose a risk to small children, or the (now outdated) concern regarding the difficulty of vaccinating ferrets against rabies. Ferret advocates often argue that the reasons for illegalizing ferret ownership stems mainly from outdated information or crucial misunderstanding of the facts about ferrets.